“There are always challenges with a remote project; the logistics were very impressive!” – Jury 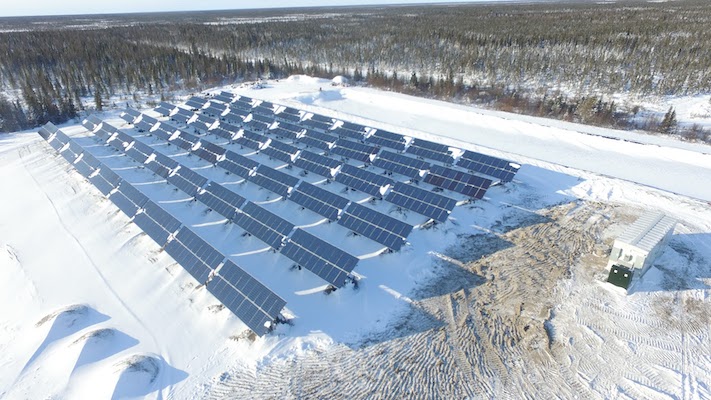 As protectors of a declining polar bear population in Northern Ontario, the Fort Severn First Nation (FSFN) has a vision for renewable energy to power its remote community. Part of this vision is a 300-kW solar array. Hedgehog Technologies led the project management, engineering and co-ordination of logistics. Community training programs were also developed to support maintenance of the project after its completion.

In 2016, FSFN hired a contractor to manage a solar project. Given the remote nature of the community and the corresponding complexity, including seasonal weather challenges, the contractor underestimated the project’s needs, exceeded the budget and had to be replaced.

Hedgehog principal engineer Michael Wrinch, P.Eng., subsequently visited Fort Severn to learn about the unique aspects of local culture, foreseeable challenges and how to revive the project within budget.

Working with all of these parties, Hedgehog applied a risk-based project management approach to complete the deliverables. This approach included conducting studies, including a projection of annual power generation, and co-ordinating protective devices to ensure the solar array would not cause disruptions for the local utility. Through the dedication of each party, the once-abandoned project became a reality.

Renewable energy system projects in remote regions are challenging to manage in terms of location, harsh weather conditions, availability of resources and communications. To navigate these challenges, Hedgehog adopted an innovative strategy that combined agile and risk-based project management.

Compared to a typical resource-based project plan, where sequential steps are interdependent, agile risk management uses a standard list of objectives in conjunction with a regularly updated project risk register. This allows for ‘sprints’ to address higher-risk activities—i.e. those that could result in technical, financial or indefinite delays and a failed project—and for real-time re-ordering of prioritization. (A medium-risk activity could cause significant delays or costly remediation, while a low-risk activity would be considered non-contentious and not change the project’s direction.)

The agile risk management approach to project planning helped the team react to unpredictable events, such as severe weather impacts, the COVID-19 pandemic, equipment failure and major design modifications—while remaining on schedule and within budget.

Fort Severn is located close to the mouth of the Severn River, which spills into Hudson Bay. FSFN has relied on diesel generators to power its infrastructure, but without an all-season road, extreme weather conditions made it difficult to access essential goods, with a supply route shifting between ice road, barge and air cargo, depending on the season.

With the added complexity of the COVID-19 pandemic, logistics played a defining role in the outcome of this project. Any miscalculations, shifting weather patterns or replacement components made the budget vulnerable to rising costs within the supply chain.

In spring 2020, for example, a large crane was scheduled for shipment by barge across James Bay, to position an electrical house (e-house) near the solar installation. With an unusually extensive build-up of ice from the winter season, however, the barge was denied clearance to leave the port until the following year. Hedgehog devised a contingency plan for local excavators to pull the e-house into position. Any damage sustained to the structure would have been expensive to replace and would delay the project indefinitely.

Hedgehog also performed a finite element analysis (FEA) to determine how temperature and friction could affect the e-house. This was important to confirm its structural weak points would withstand a lateral pull motion. Then, on the day of installation, as a blizzard reached Fort Severn, Hedgehog and the contractors at Bower Electric proceeded to drag the e-house to its destination through the snowy terrain.

The e-house was installed during a blizzard. Photo courtesy Hedgehog Technologies.

With its transition away from fossil fuels to solar power, FSFN has become a blueprint for other Indigenous communities to follow.

For one thing, the project is proof that renewables can operate on microgrids, through which a First Nation community can independently manage its own energy needs. For another, FSFN improved its connection to the ecosystem and forged strong partnerships that were needed to make the project successful, while showing determination and perseverance in the face of logistical challenges.

One key step was developing an operations and maintenance (O&M) program, including training, manuals and procedures. A community energy champion was trained as the local operator, who oversees repairs with Hedgehog’s support.

In collaboration with FSFN Chief Paul Burke, Hedgehog developed community training programs to teach local residents how to maintain and repair the solar array in the future. Through this initiative, new economic opportunities have emerged.

One example is a young electrician, Owen Miles, who was designated the community energy champion to oversee the solar project after completion. Such economic drivers are important to Fort Severn’s future.

Further, the solar array is expected to generate savings between $250,000 to $350,000 annually, depending on the amount of available sunlight. Chief Burke recognizes the cost savings will provide more control over finances and he plans to invest them into the development of new homes across Fort Severn.

Fort Severn shares the wetlands of Hudson Bay with an at-risk polar bear population. Climate change is a major factor affecting the FSFN, whose members depend on trapping, fishing and hunting to thrive. The community recognizes wildlife as an important part of the ecosystem and takes pride in protecting polar bear dens during mating season.

The completion of the solar array provides a sustainable energy source for Fort Severn and offsets its dependence on diesel generators. Specifically, the array is expected to displace up to 400,000 L of diesel on an annual basis, factoring in the additional costs of transporting barrels using cargo planes, ice roads or barge ships across changes in season.

(It is also worth noting a barge previously sank on its route through James Bay. It contained food supplies, so its loss negatively affected the community, but had it been filled with barrels of fuel instead, it had the potential to be an environmental catastrophe.)

FSFN took an innovative approach to reduce its greenhouse gas (GHG) emissions through the use of solar energy. Next, Chief Burke wants to empower other remote First Nation communities across Canada to do the same.