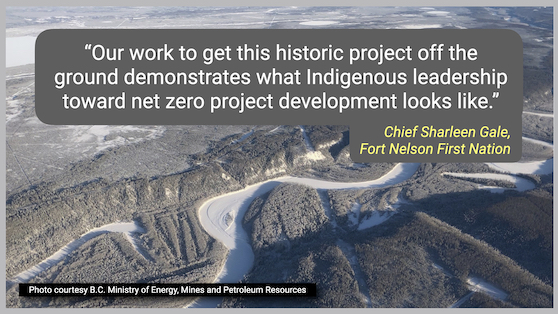 April 5, 2021 – The Clarke Lake Geothermal Development Project in northern British Columbia got an injection of nearly $40.5 million in federal investments to develop its geothermal electricity production facility, and showcase its commercially viability.

The wholly owned and Indigenous-led project is being developed in the existing Clarke Lake gas field, and will use the mid-grade geothermal heat resources in its reservoir to reduce emissions by displacing fossil fuels, reports Natural Resources Canada, adding the project will also demonstrate “the value of geothermal energy as a viable clean energy technology for rural, Indigenous and northern communities”.

“Our work to get this historic project off the ground demonstrates what Indigenous leadership toward net zero project development looks like,” said Chief Sharleen Gale, Fort Nelson First Nation.

The Clarke Lake geothermal facility is expected to produce between 7 MW and 15 MW of electricity, while eliminating 25,000 tonnes of GHG emissions annually.

Although electricity generation will be the primary source of revenue, NRCan says additional revenue opportunities could involve the sale of excess heat generated by the plant to other industries e.g. timber drying or greenhouse food production.

NRCan previously contributed $1 million for the resource assessment of this project, and contributed an additional $38.5 million from the Emerging Renewables Power Program.

Indigenous Services Canada contributed $250,000 toward the project through its Community Opportunity Readiness Program.