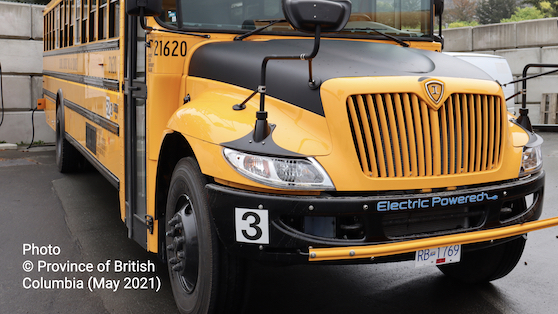 May 25, 2021 – Students in the Sooke School District (SD 62) have the distinction of being the first to commute on British Columbia’s inaugural fleet of electric school buses, which began providing service in early May.

The Ministry of Education’s Bus Acquisition program provided $13 million for 31 school districts to buy a total of 101 new buses, including 18 electric buses.

The purchase price for each electric school bus is about $350,000, compared to the $150,000 average cost for an equivalent diesel school bus, says the government. The Ministry of Energy, Mines & Low Carbon Innovation has allocated supplemental funding of up to $150,000 toward the capital costs of each electric bus.

So far, 13 school districts have purchased a total of 18 electric school buses, which will begin operating across B.C. by the end of the school year.