Mazda will introduce a range of new electrified products which will be based on their SKYACTIV Multi-Solution Scalable Architecture. 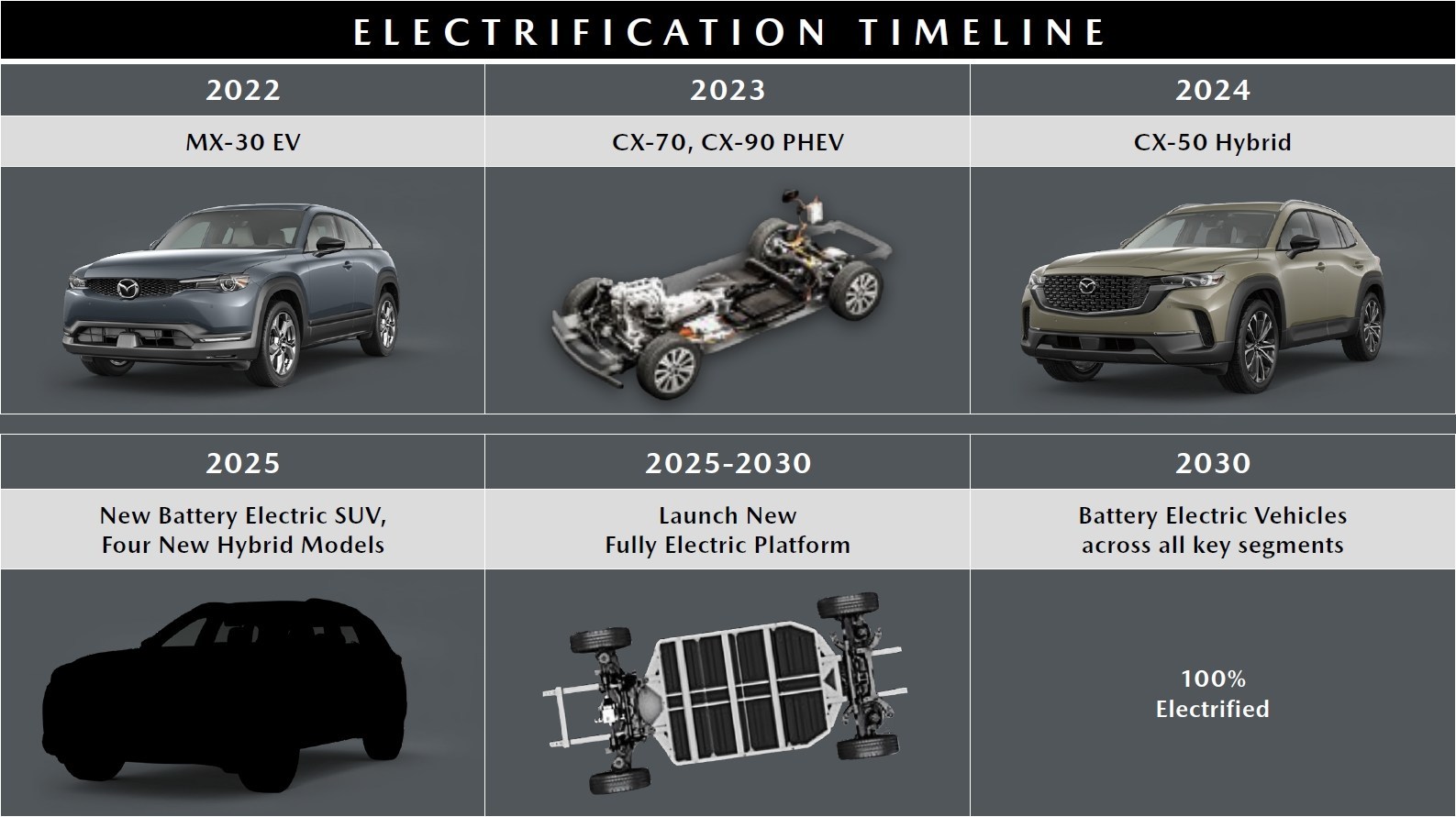 RICHMOND HILL — In the summer of 2021, Mazda communicated a global update for their future technology and product plans toward 2025, in support of the company’s long-term environmental vision, called “Sustainable Zoom-Zoom 2030”. On Nov. 22, Mazda Canada Inc. announces its updated plan for a sustainable and electrified future towards 2030 in Canada.

As they also communicated previously, starting with the CX-90 and CX-70 next year and looking toward 2025, Mazda will introduce a range of new electrified products which will be based on their SKYACTIV Multi-Solution Scalable Architecture.

By 2025, Mazda will launch a total of eight new hybrid (HEV), plug-in hybrid EV (PHEV), and battery electric vehicle (BEV) models in Canada, in addition to the MX-30 EV currently on sale in Quebec and British Columbia. These new models will include the CX-50 hybrid, CX-70 PHEV, CX-90 PHEV, four new hybrid models, and a new BEV SUV to be introduced in 2025. Additionally, sales of MX-30 BEV will expand nationally next year, and two core crossover models will also include mild hybrid (MHEV) powertrains for increased efficiency and improved emissions.

“We are very excited to be sharing more details about our electrified future in Canada, focused on the right vehicles in the right segments that our customers are asking for,” said David Klan, President and CEO, Mazda Canada. “The CX-90 and CX-70 PHEV models coming next year will bring a level of performance above anything we’ve ever offered in Canada, along with electrified efficiency, and the craftsmanship our customers expect from Mazda.”

Around the world, regulations are being updated constantly to reflect the growing need for a carbon neutral future, and the transition to Zero Emissions Vehicles is in full swing. Many regions, including Canada, have now set a goal of ending the sale of internal combustion engine (ICE) vehicles by 2035, with increasing targets along the way.

In Canada, recent vehicle sales forecasts1 show that by 2025, BEV models will consist of 15 percent of the market, while hybrid and plug-in hybrid EV models will extend to ten percent, leaving 75 percent of new vehicles sold still powered by internal combustion. Over the next decade plus, internal combustion engines will still be in a wide range of vehicles that consumers purchase and drive and there is an opportunity to keep improving this technology so they can can try and lower emissions of ICE vehicles in tandem with the shift to EVs.

By 2030 in North America, Mazda says their target is for their fleet to be 100% electrified, which will include a mixture of battery electric vehicles, plug-in hybrid, hybrid, and mild hybrid vehicles in line with regulatory requirements and customer demand.

During this period up to 2025, Mazda says they are additionally developing a new and dedicated platform for EV, which is called SKYACTIV EV Scalable Architecture and will be used exclusively for EV models.