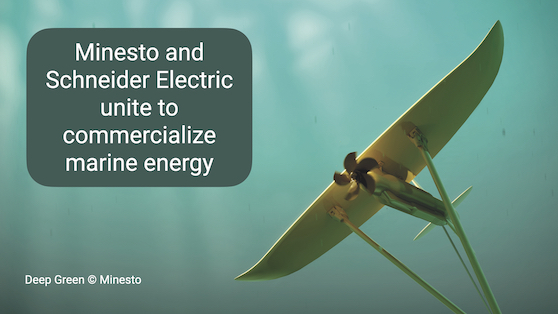 April 14, 2021 – Schneider Electric and Minesto, a marine energy developer, have signed a Memorandum of Understanding to work together to develop and build ocean energy farms based on Minesto’s Deep Green technology.

“For us, it has been of significant importance to enter the marine energy sector together with a partner developing a game-changing technology with both a global market and a potential for energy production at competitive cost of energy,” said Gary Lawrence, Schneider Electric.

Minesto and Schneider will engage with “lead-users among independent power producers and electric utilities”, and integrate Schneider Electric’s expertise with tidal and ocean current energy technology.

Projects ranging from smaller microgrid installations to multi-Megawatt farms will be jointly identified, assessed and developed, including exploiting the parties’ existing pipelines of leads. The collaboration will reach from technical system integration and project management to sales and project finance opportunities.

According to the partners, Minesto’s Deep Green is the only verified marine power plant that operates cost efficiently in areas with low-flow tidal streams and ocean currents.